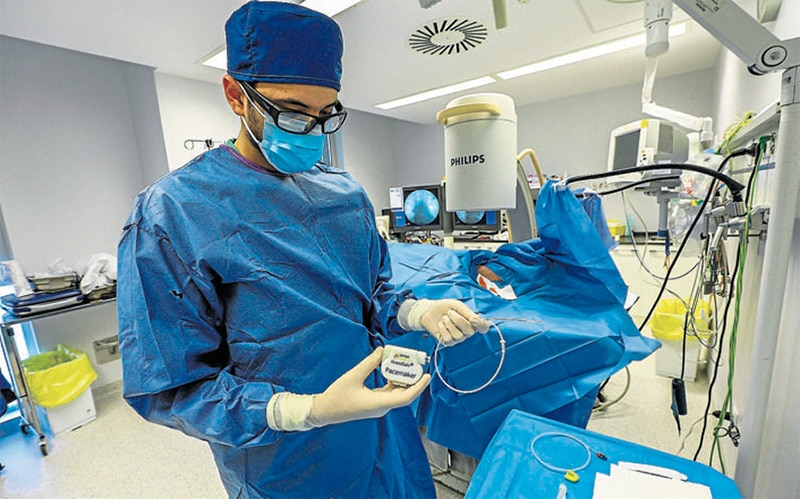 Intensive Care Physician at the Hospital del Vinalopó, Raimundo Vicente from Elche detected a need in his field of action. He has responded with a revolutionary pioneering external subjection system for pacemakers that minimizes the risk of complications and infections and improves patients’ quality of life.

Thanks to the collaboration carried out with the Scientific Park of the Miguel Hernández University (PCUMH), the doctor has developed and patented a case attached to the patient’s neck, which reduces the occurrence of a cardiac rupture by up to 35%. In cardiac stimulation, which is applied to patients with a frequency below 60 beats per minute, usually caused by excessive medication or degenerative diseases, rigid electrodes were traditionally used to stimulate the heart. These leads were connected to a battery that forced patients to remain in the ICU. The patient movement frequently caused the lead lost contact with the heart, and the rate dropped again. Since 2005, other pacemaker models have been applied, without such rigid cables. Although improved, this system also presents security problems and possible intravascular infections, which is now corrected with the device patented by Vicente and the PCUMH. To optimize this technique and improve the well-being of the patient, the doctor contacted the PCUMH. In this way, joining forces, they have created a pioneering system that solves the inconveniences derived from the traditional method of placing temporary external pacemakers. The device allows the use of electrodes and generators that are safer for patients. This system’s great innovation lies in its design and development of a subjection mechanism composed of a case in which the pacemaker is inserted. The functional parts that have been designed allow clinicians to implant the system on the left or right side of the patient, using the jugular vein. “The traditional device was placed with dressings, which meant an entry zone for bacteria, as the puncture area near the jugular was covered. The external pacemakers would detach and even pull on the heart”, explains Vicente about a series of complications that he has now responded to with his pioneering casing, which isolates the leads and prevents contamination.